The Lodge held a demonstration of the First Degree ceremony.

The Lodge was delighted to initiate a new Candidate.

Bro Phillip Rothwell was installed as Master of Schola Warwicensis Lodge. Phillip was initiated into the Lodge in December 2011.

The WM has arranged a Chapel service, followed by a drinks reception and Sunday lunch in the Halse Pavilion at Warwick School, on Sunday 12th May. The new School Chaplain, Dr Alicia Timmis, also Curate at St Marys Church. Warwick, led the service – and attended the lunch together with the new Head Master. Dr Deneal Smith.

The WM presented a cheque to the Head Master in support of the school’s bursary fund.

At our December meeting, members invited family, and friends, including a number of masonic and non-masonic friends, to listen to a talk on Freemasonry, given by W. Bro Peter Manning. Asst PGM. Two prospective candidates have come forward following the evening. A raffle during the Festive Board raised over £200.00 which will be donated to the Warwick School Bursary Appeal.

“Freemasonry in China”, the title of a talk by W Bro Peter Viola, turned out to be quite different from what some members anticipated! Starting with a very old Chinese plate recovered from a ship wreck, to pottery and china produced in the Potteries, bearing local and historic masonic symbols. He ended his interesting talk, by displaying a huge Victorian toilet bowl, with an inscription of Guy’s Cliffe. 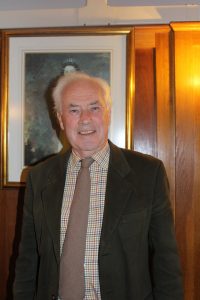 Roger is an OW, having been at Warwick School from 1950 to 1958. From Warwick, he went to Reading University, and took a degree in Agriculture in 1962. After an early career in farming, he qualified as a rural chartered surveyor in 1974. In 1985, Roger acquired the very old practice of Margetts, in Warwick High Street, of which he is a director.

Roger was initiated into Shakespeare Lodge, which meets at Warwick Masonic Rooms, and was invited to become a founder member of Schola Warwicensis Lodge upon its formation in 1989. He was appointed W.M. of the Lodge in 1994 and was re-appointed as Master for the 2018-19 year. Roger’s aim as W.M. is to re-establish closer ties with Warwick School.

Around 60 guests attended the Worshipful Master’s Christmas Celebration held at Alderson House, Warwick, on Friday 1 December. A particular highlight was the “12 days of Christmas” carol. A raffle was held in support of Warwick School’s Bursary Fund, to support able students from disadvantaged backgrounds, raising a splendid £300 for the cause.

W Bro Peter Bailey (WS 1942-49), a founder of 9321, has recently completed a hat-trick of masonic 50 year certificates, with the presentation in October of his Royal Arch certificate. He was presented with his Craft certificate in 2013 and his Mark Degree in 2016. He even awaits another with his Royal Arc Mariners being due in April 2018.

W Bro Stephen Wall (WS 1977-82) was Installed as Worship Master of Schola Warwicensis Lodge in July this year. Whilst at school he gained an RAF Flying scholarship, and after leaving school he went on to qualify for a Pilots certificate, and has therefore, this year joined W Bro Andy Dawkes (WS 1979-84) as the second pilot in the lodge to hold that distinction – Andy is a senior pilot was BA, flying Boeing 777 Dreamliner aircraft. Andy was also Installed as Master of his London Lodge, Per Caelum Lodge No. 8602, a lodge with a requirement to be a member of the Guild of Airline Pilots to be considered for membership, in October this year.

Warwick School recently held a fundraising campaign to raise £1.1 million to support the costs of a new school hall, which would benefit pupils and members of the local community for years to come. Schola Warwicensis Lodge sponsored a stone in the new hall to support this special project and celebrate the links between the Lodge and the school.

W Bro Alistair Page was delighted to assume the role of Master of Schola Warwicensis Lodge for the 2016/17 year, taking over from W Bro Roy Dixon. Alistair attended Warwick School from 1965-1971. He was previously Master of the Lodge in 1999. We look forward to a successful year. 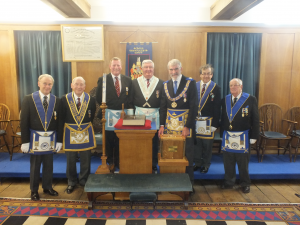 At the Festive Board, following the Installation Meeting, the Worshipful Master, Wor.Bro. Len Rose, supplied a suitable decorated fruit cake together with a bottle of malt whisky which enabled the Lodge to present a cheque of £500.00 to the Headmaster for his Bursary appeal. A further cheque of £100.00 was sent to the Air Ambulance Association. This was all due to the generosity of the Brethren and visitors at the Installation meeting.

Schola Warwicensis Lodge No. 9321 celebrated its 25th Anniversary on Friday 4th July. W.Bro.L.H.Rose was installed as Master. A highlight of the evening was the new Master’s presentation of a superb cabinet for the Working Tools to the Lodge. This had been made by W.Bro.Rose himself.